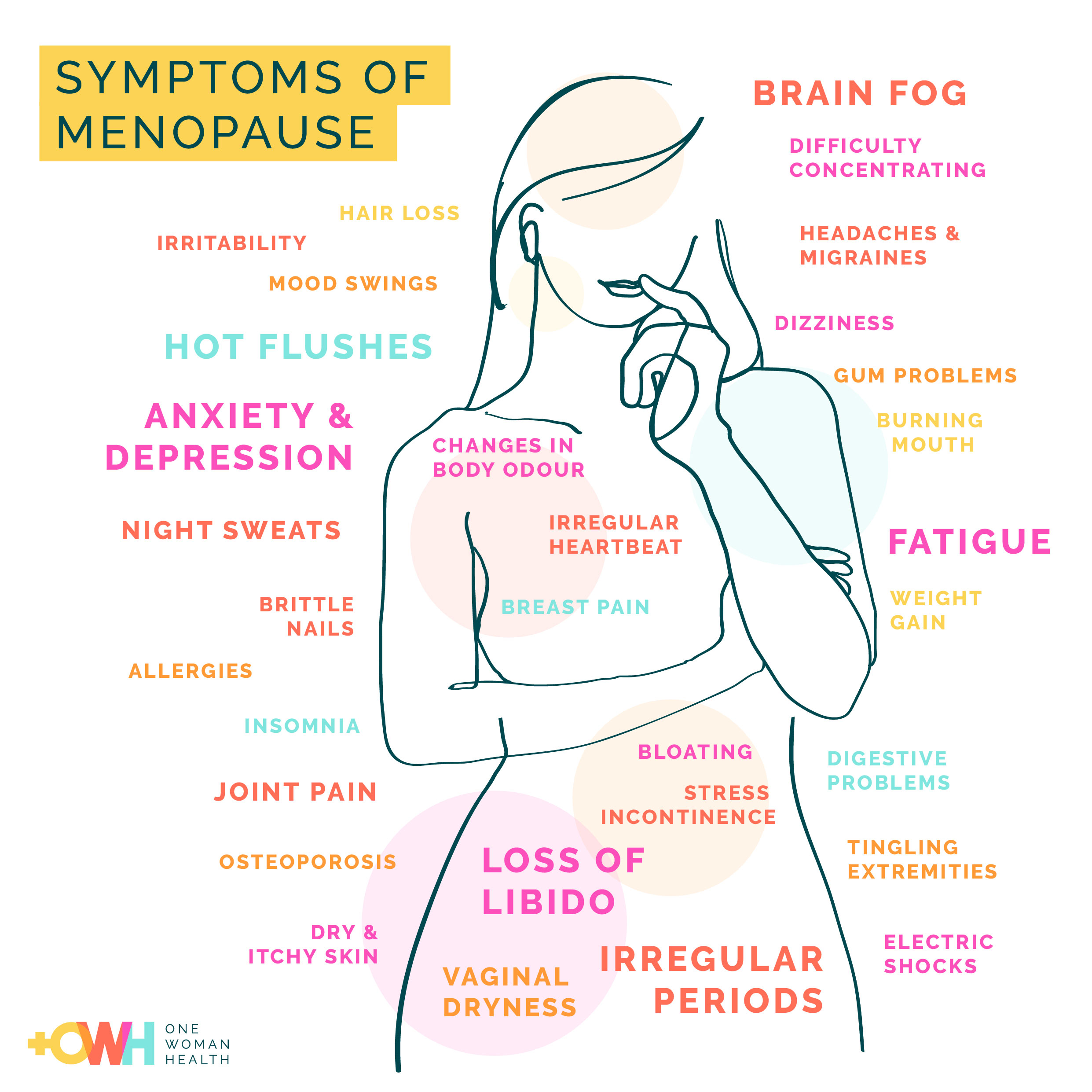 Identifying whether symptoms are caused by menopause can be confusing for women. Many women delay getting help for their symptoms because they either didn’t realise they were due to menopause, or they weren’t sure if they were due to something else. Take insomnia as an example. Some women may not know that poor sleep can be associated with menopause and others may attribute it to life factors such as stress, sleeping with a snoring partner or being disturbed by children.

Being able to recognise menopause in yourself is the first step to taking control. So, if you have symptoms you’re not sure about, feel free to chat to one of our doctors. We’ll be happy to discuss what you’re experiencing and can offer advice about what to do next.

Why does menopause have so many symptoms?

Our hormones circulate around our body and exert an effect on any cell they come into contact with that has the right receptor to recognise it. We know that oestrogen receptors are present in the majority of tissues around the body, so it stands to reason that a decline in oestrogen can affect almost any part, including those you might not automatically think of such as the immune system, fat cells, skin, gut and central nervous system. Read on for more information:

What are the symptoms of the menopause?

In the lead up to the final period, expect the unexpected! Early perimenopause is defined by cycles that are vary by 7 days more than normal; that is more than 7 days shorter or longer than normal. Short cycles can lead to frequent periods which can be really disruptive, with some women describing this as though they are ‘whizzing around their cycle’.

Late perimenopause is defined by far fewer periods: 2 or more skipped cycles and more than 60 days without a bleed. While all of the above can result from normal hormonal changes, heavy or more frequent bleeding can also have other causes so it’s worth speaking to a doctor and bleeding after the menopause should always be reported.

Otherwise known as ‘vasomotor symptoms’. Normally, the body’s core temperature is tightly controlled by the hypothalamus, an important part of the brain (what isn’t?!) that controls many of our automatic functions. It is thought that declining hormone levels alter the way this part of the brain responds, leading it to trigger an exaggerated heat-loss response where blood vessels in the skin widen, increasing blood flow leading to flushing and ultimately sweating. The good news is that vasomotor symptoms usually respond well to HRT and the reduction in sweats/flushes can be used to guide the dose that appropriately meets a woman’s needs.

Another part of the brain, called the hippocampus, is also stuffed with oestrogen receptors! The hippocampus is where we lay down memories.
Ever found yourself mid-sentence and you can’t remember what you were saying? Or find yourself forgetting names, when you’d normally remember? Along with mood changes (4), brain fog can be one of the most troubling symptoms of menopause. It’s one that concerns us at One Woman Health because it often appears early in the perimenopause, before people are aware they are perimenopausal. The loss of confidence people feel can be a key cause of women stepping back.

Psychological symptoms are common in perimenopause. Along with the cognitive issues discussed in (3) these are the most troublesome symptoms for many women. It’s also common for women to be prescribed antidepressants without recognition that the mood change is due to menopause, or being offered HRT. The good news is that if your feelings are out of character for you, you may well feel much better with treatment for your menopause.

Changes in sweat production due to vasomotor symptoms and even anxiety can alter the way we smell.

Fluctuations in hormone levels can really interrupt sleep, leading to frequent waking or unrefreshing sleep. Energy levels may fluctuate and will tend to be lowest when oestrogen levels are lowest.

Women who get hormonal migraine can find that these worsen around the menopause due to the fluctuating hormone levels. Conversely, some women find their headaches becomes less frequent as their hormone levels reduce, and may be worried about hormone replacement therapy triggering headaches again. Smoothing out these fluctuations, and ensuring women susceptible to headache have even hormone levels can help, and is recommended by the British Menopause
Society.

Needing to pass urine more often than normal can be a sign of the menopause. It may also be a sign of a urinary tract infection, which is also more common at this time of life. The lower part of the bladder and the vagina are formed from the same cells in the developing embryo, and both are therefore very responsive to oestrogen. A drop in oestrogen can cause the need to pee more often, especially at night.

Lower oestrogen levels also cause less vaginal lubrication leading to dryness and itch. Also, the acidity of the vagina changes which in turn changes the distribution of healthy bacteria in the vagina (normal vaginal flora). The good bacteria usually help to keep out the bad bacteria, so without them, infections are more likely.

Vaginal dryness is a common symptom but many women don’t report it and hence may miss out on treatment. However, many women will benefit from vaginal oestrogen treatment, even if they can’t or don’t want to take whole body HRT.

Women may report reduced sex drive in the menopause and more difficulty achieving orgasm. This can be due to a number of factors, not least the other menopausal symptoms including vaginal dryness that may make sex uncomfortable and feeling fatigued and low. It’s important to take a holistic view of sex in the menopause and to remain aware of the impact this may have on important relationships and self-image.

10. Dry skin, itchy skin, feeling of crawling under the skin

Yes, you guessed it: the skin is also full of oestrogen receptors and undergoes changes once oestrogen levels start to decline. Oestrogen normally stimulates the production of ceramides, hyaluronic acid and sebum (oil). These substances hold water within the skin, prevent evaporation and maintain an effective barrier against the entry of substances that can cause allergic reactions. With lower levels, the skin barrier just isn’t so effective leading to dryness and in some cases, eczema. In addition, blood loss from heavy periods can also cause low iron levels, another cause of itching.

A feeling of crawling under the skin is one of the more unusual symptoms and it’s a parasthesia.

Nails are made from the protein keratin. With low hormone levels, nails are weaker and more prone to dehydration.

Post-menopausal hair loss affects 41% of women. Reasons are multifactorial, but the effects should not be underestimated as changes to hair can affect self-esteem and have a significant impact on quality of life.

Many women have experienced changes in their gut function at different times in their cycle and with the hormonal fluctuations of perimenopause, this is no exception.

One of the more unusual symptoms of menopause is burning mouth syndrome. This is the sensation of a burning pain in the mouth in the absence of any other cause (such as skin disease of the mouth). The good news is that half of all people report symptoms go away completely, and it may respond to treatment with HRT or antidepressants.

15. A feeling of crawling under the skin.

Also known as formication, this too is a parasthesia related to menopause. Tingling hands and feet or the feeling of electric shocks throughout the body is also possible.

While a racing heart and dizziness can be linked to the menopause, these symptoms warrant investigation to check there isn’t another problem afoot first. It’s also worth remembering that the risk of cardiovascular disease for women rises significantly during the menopause, so it’s a good time to review your heart health and understand how you can keep it healthy into the future.

Some women report allergies such as hayfever, eczema or asthma for the first time in their early 40s, associated with the perimenopause. There are many factors at play here, and in the skin, the reduction in the effectiveness of the skin’s barrier is one. However, we also know that oestrogen even modulates the immune system, reducing inflammatory responses. one third of women report a worsening of asthma symptoms around the time of their period when oestrogen levels are lowest. If you have asthma and you’re needing to use your reliever inhaler more than three times a week it’s time to book an asthma review to get your symptoms back under control

Previous PostHow private online menopause care is helping thousands of women…..can it help you too?
0Shares 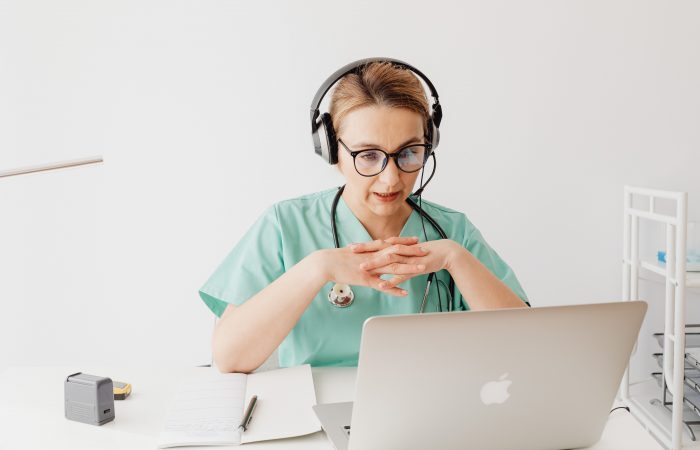 How private online menopause care is helping thousands of women…..can it help you too?

The pandemic has brought online consultation into the mainstream with enormous benefits for women……writes Dr. Nina Wilson, founder of One... 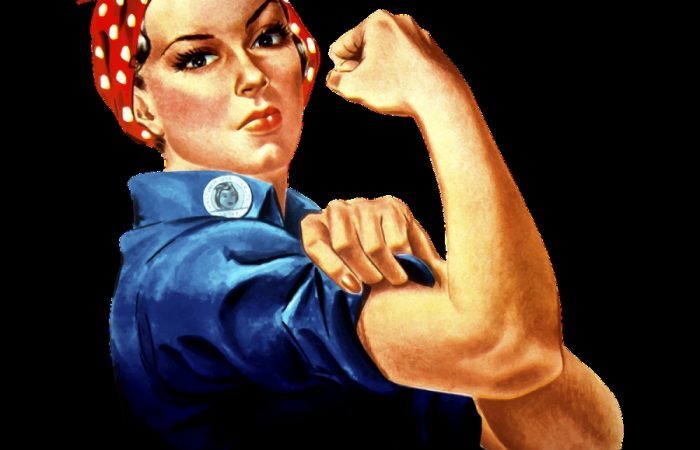 Can testosterone improve your sex-life? 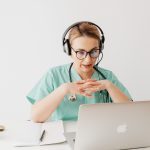 How private online menopause care is helping thousands of women…..can it help you too?
13 June 2022 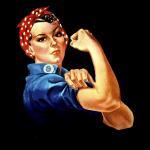